Sometime during my undergrad, I wrote a simple Flask app that had tons of intentional security vulnerabilities. I served the app from my laptop at a security club meeting as a challenge to see who could find all the vulns first. Students connected to my laptop, interacted with login forms, and played around with my website. About 10 minutes in, everyone started reporting that the server was taking too long to respond. I visited the homepage of the app and confirmed that it was taking around ~3 minutes to load. At the time, I thought maybe my laptop couldn’t handle the 20-40 people in the room connecting simultaneously, and that I should have gotten a dedicated server. Thinking back, though, that couldn’t have been the case. My laptop had an above average 8-core Intel i7 CPU, 16GB of RAM, and an SSD. It also wasn’t running much software other than the web server. So what was the issue?

There are plenty of tutorials on how to build basic web apps using Flask. However, most of them stop short at letting you use Flask’s debug web server to serve your application. In a production environment, like my security club room, you’d never want to serve an app this way. Today, I’ll introduce some of the software used to serve a Flask application and how they fit together. Using this information, you can create an app that serves thousands of clients from just your laptop!

Very briefly, I’ll introduce the basics of a Flask application. First, we start by creating an application object.

Then, we register different URIs and define the corresponding functions to call when they get hit.

And that’s really all there is to a web application!

Think of the app as an API. The app object doesn’t “do” anything; it just defines requests and how to respond to these requests.

The Flask application object defines the different URIs and appropriate responses. However, it’s not capable of actually “serving” the application - it’s just a definition. We need a separate piece of software to serve the app, and we call it an application server. A server handles details about:

How does it do this? It starts by listening for incoming connections on a host and port. When it receives a request, it parses the request and current environment for information like:

The server might use threads and buffers to deal with multiple simultaneous connections, where each thread sends request information to its own app object and responds to its request with the returned content. There are several different application servers out there, each with its own advantages and disadvantages.

So how do we find a server program to serve our Flask application? Well, it turns out that Flask comes with one!

Flask comes with a built-in library called “Werkzeug”, and that library contains a server to serve your app. The Werkzeug server is instantiated and run if you call app.run(), where app is the object you got from app = Flask(__name__). Now, you can serve real requests to and from your app! The run() function takes some arguments like what IP address you want to serve from, what port to serve from, and whether debug messages should be printed on error.

Werkzeug’s server isn’t designed to be efficient, stable, or secure. It doesn’t scale well when multiple users access the website (which is why my website was so slow!). Werkzeug’s server is purely something for quick testing during development of your application, without having to search for and install another server program. There are much better server programs that can efficiently support hundreds or even thousands of connections at the same time!

The servers that exist today are complex software that handle multiple parts of the server stack. To understand why, it’s important to first understand what the WSGI protocol is and why it came to be.

There are many competing web servers to choose from (Werkzeug, Apache, nginx, Lighttpd, etc).
There are also many Python webapp frameworks (Flask, Django, Tornado, Pyramid, etc).

In the past, each server expected response content from the webapp in different formats. Similarly, each webapp framework expected request content from the server in different formats. If you got tired of using Flask and wanted to switch to Django, you might’ve had to find a different server that supported the request/response format that Django used. It would be great if each framework could work with any of the server programs and vice-versa. That way, you could keep your existing server configurations even if you wanted to switch webapp frameworks.

Eventually, some smart people decided to make a standardized protocol for requests and responses between servers and apps. The Python community introduced WSGI (pronounced “whiz-gee”) as this protocol. WSGI standardizes the way servers talk to Python webapps and vice-versa. Today, all servers and Python webapps implement WSGI. 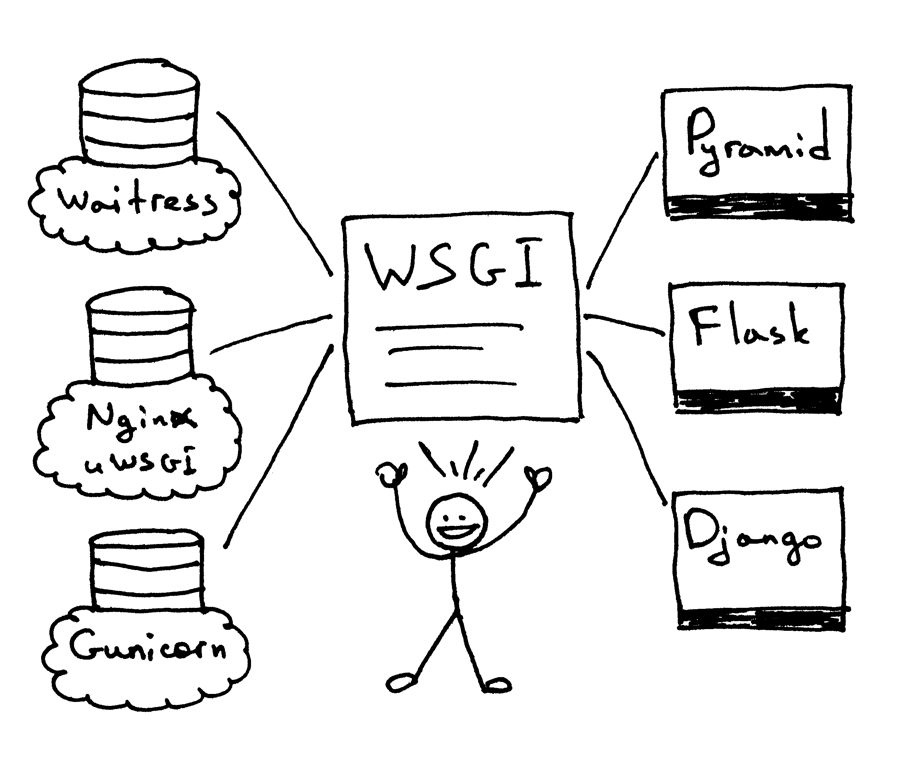 In our examples from before, Flask was the webapp and Werkzeug was the web server. Both of these are WSGI compliant!

For a webapp framework to be WSGI compliant, it just needs to define a function with 2 parameters.

We call this function the “callable”. What should the callable do?

That’s it! That’s all it takes to build a WSGI compliant webapp. You could even create your own WSGI Python webapp without Flask or Django using just this knowledge.

To be WSGI compliant, the webapp has to define a callable function (shown above as app) with two parameters. But the “function” can actually be an object too! As long as the object implements __call__, it’s callable like a function is. In Flask, the object returned by the Flask() constructor is the WSGI callable. So when you write app = Flask(__name__), you’re creating a callable called app. Looking at the source for the Flask class, you can see it implements __call__. As expected, it takes 2 arguments:

Any server that is WSGI compliant will require a reference to the app callable. The server communicates with your callable using the WSGI process we defined above, passing along request information and receiving response information. For more information about building a WSGI application, check out this page where I learned most of this information from.

Since every web application needs to provide callable functions and handle specific params it receives in WSGI form, it would be great if a library handled this “callable” interface. Well, it turns out that Werkzeug is this library! It provides utilities for developing WSGI-compliant webapps, like:

As we discussed before, it even includes a simple web server. Running a whole server like nginx is probably overkill for just testing on your own box. You can use the Werkzeug server to do your testing instead in a matter of seconds by just entering app.run().

Flask uses the Werkzeug library, so Flask comes with the Werkzeug server. You pass the Flask app as the WSGI callable. As we mentioned before, the problem with this server is that isn’t meant to be efficient, scalable, or secure. So what are our other options?

uWSGI is a full-fledged HTTP server. It takes in an HTTP request and converts it to a “WSGI request”. Then, it passes that along to the callable and waits for the response.

gunicorn is a web server modeled after Ruby’s “Unicorn” web server. It’s similar to uWSGI in that it takes in HTTP requests and translates them into WSGI requests for the callable. The main allure of gunicorn is that it’s very easy to setup. It also:

gunicorn uses a “pre-fork worker model”, which essentially means that a master process forks many other worker processes. Each worker process is ready to handle an incoming request and contains a reference to its own callable. Upon receiving a request, a worker will translate it to WSGI, send it to its callable, and wait for the response. Scaling a gunicorn server is easy since you just need to configure gunicorn to spawn more workers!

Pre-forking systems are great for low latency communication. They have no cost in spinning up a process to handle each request since the processes are already spun up and just sit around waiting. However, they’re not so great at handling slow clients and traffic surges since each worker thread is occupied with its request until it finishes. In those cases, you may be better off using nginx.

nginx is a reverse proxy that can also be used as a web server. nginx especially excels at:

nginx is more reslient in the face of slow clients as well since it only sends requests to the backend webapp as fast as the backend can handle. When the webapp returns a result, nginx buffers the response to feed it to slow clients at their own pace. The backend can move on to handling another request even as the slow client is still receiving the result.

Another use case for nginx is as a reverse proxy. Let’s say you’re serving multiple web apps from the same box, but perhaps on different IP addresses or ports. You can use nginx to route requests for any of the apps to the appropriate backend webapps. You could also use nginx similarly for load balancing.

Most commonly, you’ll see nginx used in conjunction with another web server like uWSGI or gunicorn sitting behind it, like the following:

You’d use nginx to:

This is about to get tricky, but bear with me. The TLDR is that nginx just doesn’t support that feature.

nginx can’t translate to WSGI, but it does have a module that can translate HTTP requests to something called uwsgi. Just enter uwsgi_pass <your_uWSGI_server> in your nginx configuration to enable this.

Note: gunicorn doesn’t support receiving a request in the binary uwsgi protocol, so when nginx is used with gunicorn, you have to just send the HTTP request directly over to gunicorn (use proxy_pass instead of uwsgi_pass). This is probably the biggest real difference between gunicorn and uWSGI since uWSGI supports both HTTP and uwsgi.

So, nginx can’t directly send information to the Python callable because it doesn’t support the WSGI callable interface; it only supports directly forwarding the HTTP request or translating it to the uwsgi binary interface. WSGI callables will expect information to be passed to them via WSGI format, so nginx can’t call the callable directly. Why doesn’t nginx support the callable interface? I’m not sure. Maybe the devs are lazy? There would be marginal gain since there are already tons of projects like uWSGI and gunicorn that already implement this, so maybe there’s no reason to include it in nginx.

Flask seems like a simple webapp framework and yet the details of efficiently serving it can get very complicated. I’ve tried to distill my admittedly cursory knowledge of the subject into this post but I’m sure there are still gaps to be filled. If you spot any inaccuracies or have different ways of serving your apps, I’d love to hear from you in the comments!